Back in the studio and other stuff 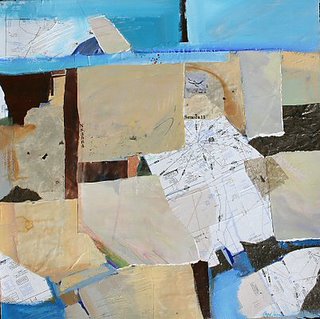 Well that started out with a bang….I pressed enter and nothing but a title comes up. Good thing there is an EDIT button. That’s what happens when you don’t post for so long. Also trying to remember the log on info :>)

I haven’t been in the studio a lot the past month and a half. I’ve been preparing to ship a lot of work to my gallery in Winston-Salem, NC for a show that opened there at the West End Gallery November 4. Here are some pictures taken at the opening reception …. http://pg.photos.yahoo.com/ph/cheryl75604/album?.dir=/dc47&.src=ph&.tok=phnNN5DBG4RPSbbj

I did work on something I planned to give to the pilot who took me to Santa Fe in June…..gosh was it that long ago? How time flies. I wanted to make a collage using some materials and information from the flight. His plane is a Seneca II, so that, and some flight maps of the area and the tail letters of the plane were incorporated in the work. I did have an idea to add other images but lost the hard drive on my new computer and along with it some of the photos I took on the trip.
If you look closely you will find a small image of a Seneca II plane. This collage is 22 x 22″.

Now that I’m back from North Carolina, I’ll be back in the studio with a lot of work to do. First, will be to start back to work on the 40 x 50″ canvas that I started earlier when I painted the “storm”.