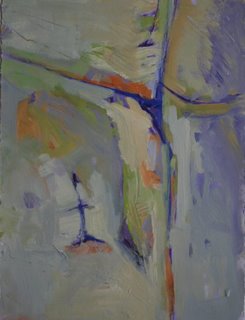 Got up about 8 am….fumbled around slowly in a place where all your stuff is scattered about in unfamiliar spaces.

Looking out the window of Maison du Patio this morning, I see that the corn fields that were freshly plowed when we arrived are now starting to sprout little green sprouts in just these couple of days…..feels like spring is sprung around here.

Procrastination is the word of the morning….dreading hauling art supplies down stairs on multiple trips with the sprain….but gotta do it sooner or later.

Started two small paintings….usual fields landscape type…under-paintings in red violet on one and blue violet in the other with the thought in mind that the final paintings would have a yellow green dominance or at least some. Using lots of pale golds and grays… .I may have not used enough value change…..one of those things I need to sit back and think about later with fresh eyes.

Came back later after lunch and checking out the other studios, taking photos and decided the “magic genie” had not come into the studio to wave her magic wand over the paintings and make them into masterpieces……..they’ll do though.

Hummm….don’t know what happened to that photo…..it rotated and is going the wrong way. Pretend it can be rotated counter clockwise one click.