Still working on the small pieces…. 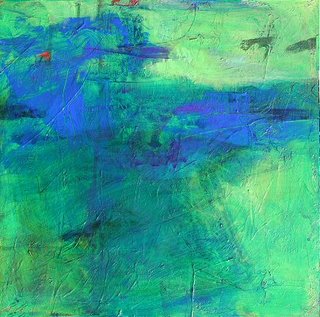 I’m back to working on the pieces I had going a week or two ago. I just painted over one of them and now it’s in it’s third incarnation. I’ve painted over and then sanded and glazed with gloss medium and painted over again.

Who knows if it’s finished for sure..but it might be.

I’ve been so used to working on larger pieces that I lose touch at times with when to stop on smaller ones. I’m more inclined to fiddle around with these smaller pieces that I’m up close to and get down from the wall and place on the painting table. The color is pretty intense.

The other one I’ve been working with is the other red one on the wall easel at the same time. It’s beginning to look like Christmas already :>) with all the red and green in the studio. This one didn’t need much else done to it except a little glazing after I let it just hang around for a time. I, also, think I’ll let the other red one that looked like it had a tornado in it alone as well. 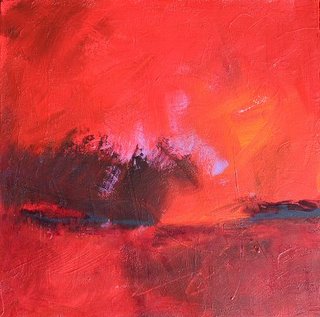 Both of these are 16 x 16’s acrylic on gallery wrapped canvas. I’ll be off to Dallas tomorrow unless something happens………..back in a few days.