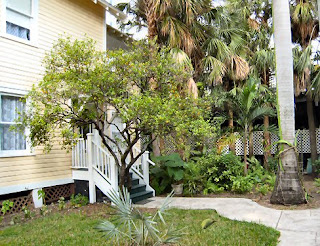 That’s what I have after coming home from Art Basel-Miami. No way around it, my brain is NOT working. I saw so much and yet I didn’t see a fraction of what was there to see. AND, I’m only talking about art here…..not all the partying and networking that was going on all over the place.

And I’d never been to Miami, or even Florida, so it was all foreign to me. I’d heard Miami was dirty and they didn’t speak English there ( I won’t divulge where I got that info). I must say right out that I loved it……and what I saw was great. They may not have all spoken English (some areas more than others, maybe) but I felt like I was in another country in the area where I stayed in East Little Havana……….and they had a fantastic place there at the B & B …Miami River Inn …with 4-5 bungalows………near our home away from home, I felt like I might be in the REAL Miami. I even found some really cool but comfy little thong sandals really cheap on 7th or 8th Street or Avenue (can’t get those straight).They name some streets and some avenues with the same name ….and Cuban food the first night at a strangely named restaurant named Versailles Restaurant..located on SW 8th Street.

First of all, next time I go to something like this I will NOT buy my tickets to get in the event ahead of time like I did this time………….I wasted money as I couldn’t go the second day to the main event or I wouldn’t have been able to see a few of the other shows there. I’ll just stand in line to get my ticket day by day or take my chances and get there early and pray. As it was, I still didn’t see a fraction of what was there to see. I suppose I should have noted what I wanted to see exactly but over time I’ve found that only makes me anxious when I can’t get over to see what I had planned. This time I was going with the flow so to speak. Just go where everyone else wanted to go, and in the time allotted. Oh yeah………that was another thing……nothing opened until noon, so how did you expect to get around to seeing much in the time frame. I’d not really taken note of that. Good things and bad……….at least you didn’t have to get up at the crack of dawn to get to something but my old internal alarm went off and I got up and was ready to go by at least 9 am, coffee and the breakfast goodies put out by Carlos at the Miami River Inn. The evenings were full of walking/strolling around just gawking at things like the Delano Miami scene and all the people………too bad I’m not a people painter!