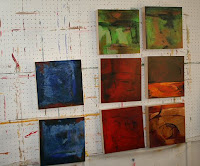 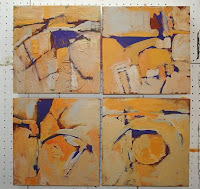 I got sidetracked from the panels by getting some airline reservations………not to be used until May. It will be a nice trip when the time comes.

I did get back into the studio and various other energy taking endeavors yesterday. I pulled four of the group out and just painted. Looks an awful lot like some of my big paintings, only small. Actually, I started with three and then pulled in another one that wasn’t working with collage under a couple of layers of paint.

Now I gotta ask myself why I’m beating myself up over painting all these little panels when they are taking so much time and will not bring in as much revenue as one big painting. Ask……well, of course, I didn’t know I was going to get blocked like this and not like a darn thing I was painting. I was expecting MORE and didn’t get it. If people who buy paintings only realized that (for me anyway) they can sometimes take more time and patience than large works, then maybe they would be willing to pay more for them.

My original idea was for them to be hung and sold as groups of four anyway. Although now I can say that the original idea was to have three painted ones and one turned with the shadowbox incorporating 3 d objects/collage. A purchaser could then arrange them to their heart’s content. That idea went down the tubes when none of them were working. With that out of my mind, I can now just go paint them in groups of however many works.

I have no idea how I will like them all or if anyone else will either when I’m done. I still haven’t done anything else to the two green/darkblue ones and have two other sets to work on next.

I was just set to put them all away and get out a big canvas but then worked on these instead.