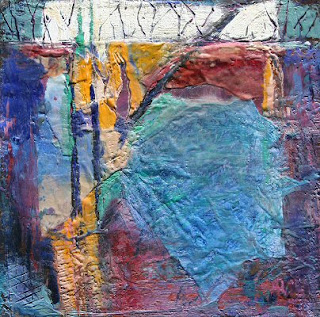 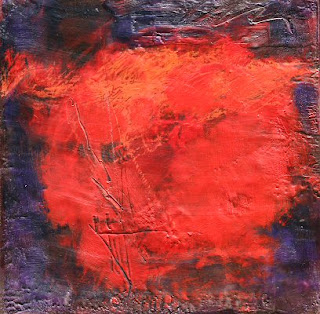 Tripping the breakers! That’s what happened this morning as I heated up the wax and got ready to play around again with the encaustic. Guess I had one too many appliances plugged in so it tripped my electric strip. I guess I’ll just have to get a stronger strip wattage wise or spread some of this energy about some way in the studio.

My friend, Pat, came over the other day since we never did make contact as I came through Louisiana on my way home from MS. She wanted to see what I was doing with the wax… and see it in person.

We had a good time playing around in the studio Wednesday night and Thursday morning. I, also, took the first ones I decided were finished out and took slides and digitals.

Here are two more that I think I haven’t shown yet. The red one is all wax and oil pigment sticks and the other is a combination of wax, pigment stick and collage elements. When I got almost through working on it, it dawned on me that I was painting that tree line base that was showing from my space at the upper pavilion at colony. It’s not often I know what I’m painting until a long time later, if ever.