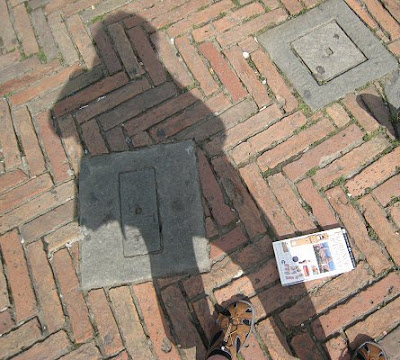 We planned on having an internet catch-up day today and making cannelini beans. Without the internet coming back on (wonder if they close down the router at night), guess it will just be the beans.I just chopped some garlic and onions, added sliced up proscuitto to some olive oil, added the soaked beans and a dash of pepper, basil,etc. and am cooking. Guess we’ll know how they turn out later. Wondering if I can throw in a handful of rocket (arugala) from the garden here just before serving.

Left for Perugia about 2pm since nothing is open from 1:30-3:30pm anyway. Had another nice trip to the capital of Umbria…More traffic here of course, but we made it through. It takes driver and navigator and sometimes a few times around the round-a-bouts. Good thing those round-a bouts.

When we got home Carolyn’s daughter was IM-lng with her and asked if we bought chocolate…Darn it I forgot Perugia was famous for chocolate. At least I ordered chocolate in my caffe while there.

I took some pictures but found my own shadow arresting as I scanned around looking for something to shoot………..maybe I should call it my self portrait.