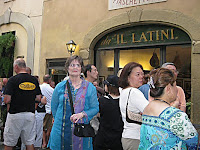 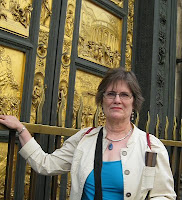 Hum, what to say, what to say! What can you say about places with such a long history. I’d visited briefly before and went to the main museums (Uffizi and the Academia) but really didn’t know or see that much but take in the old city near where we stayed.

This time I stayed at the same location just off the Doumo Piazza but had Carolyn with me. She teaches art history………..so for sure, I had a font of knowledge right there with me. She’s also been there many times in the past.

So we made the rounds…and I do mean rounds and at about 92 degrees and many miles of steps we were bone tired by the end of the two days.But, I digress as I’m prone to do . Carolyn had never been to the Santa Croce cathedral so we went there that first afternoon. The next morning we set out for another place she’s always wanted to see and hadn’t……The Basilica of San Miniato Al Monte (top of the mountain to you, and especially to me. I thought I’d never get to the top of the steps that seemed to go on to infinity. If there is a place like this worth the effort of the climb, this one could be included. It is so beautiful, this 1000 year old church.

The night came and we decided to go to Il Latini, a restaurant my daughter and I had a good time at previously.We shouldn’t have as we were so tired we felt ( or I did anyway) it an effort to eat and smile. they seat you at a table with 4-8 people communal style. Our bad luck was to get seated with a young woman who looked about 15 with her boyfriend who looked over 40. She was from Kent England she told us…and did not deign to make another comment even when prodded (graciously of course )…her date was nice and the other people on the other side were too far away with her in the middle to converse with much.

So ………early in the morning we got up never dreaming we would have the energy and headed up to the Basilica mentioned previously. We’re doing pretty good for two old (nah) broads. And, we got in a little leather shopping running around as well.

On the way to the train station to return to Umbria, Carolyn took this picture of me in front of the Baptistry at the Florence Cathedral. And I took hers.

By the way……..Carolyn’s blog for this trip is located here. I’m sure we’ll have some overlap but much with a totally different perspectiv.