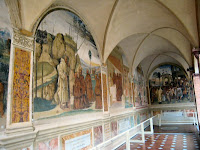 Oh my…it’s June already. This afternoon we headed off to Monte Oliveto Maggiore. I’d been there before and Carolyn had not.

It shouldn’t have been hard to find, but somehow it was. We did get off the A-1 at the right place but wandered off course at one of the round-a-bouts or strangely marked turns. Anyway…..got into a tight squeeze and now know the meaning of the term. In Sinalunga, we went down a street that continued to get smaller until the passenger side outside rearview mirror scraped the side of a wall…….OOPS. Pulled those mirrors in for sure. I got out and helped direct Carolyn as she inched (I mean inched) the way back up the steep incline. At the end the transmission (or something) was smoking. We got the heck out of there and parked the car for a short time to cool it off. I was searching for numbers to call the rental office if necessary….but the auto kept on going although we would get a whiff now and then getting into the car the rest of the day.

Finally, we reached our destination. Beautiful and worth the trip for sure. More hills to climb, as I knew.

We considered a pizza again due to the later hour and being tired. Oh well………..home to Casa Rondini and the food we’d purchased earlier at the supermarket. Carolyn made a chicken saute/pasta sauce. We had a salad and the farfalle. We served it with some bread brushd with olive oil, and the Bianco we found at the supermarket…..Limoncello for the digestiv. Better watch out for Limoncello as it can make a person go dip their toes in the pool outside (cold water). No photos of this either even under the influence of Limoncello.