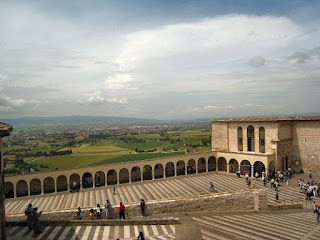 We are off to Assisi this morning. The sun was shining as we got up but by the time we headed down the road, it had clouded up. We both took umbrellas this time and planned to carry them all day. Still no internet again this morning…………and none when we returned from the trip either. Who knows why as we’ve given up trying to figure out why it comes and goes. It doesn’t seen to really have anything to do with the weather like satellite internet does. I had to take this picture of the lilies in the flower beds……just think of the fragrance. I’d been watching them for several days. Bozena said we would find new delights each day as the flowers bloomed and she was right.

“Miss NUVI ” did a good job of getting us there and back since we had to skirt Perugia.We only disobeyed her directions a couple of times this time. We found a parking garage and got a ticket. Good thing I noticed the sign saying take your ticket with you as we needed it to get back in. Weird way they had to pay as we had to go back in and put the ticket in an automatic machine with cash and then go back out and put it in another machine at the gate going out. Wonder how many just drive away and get a big fine later.

We started walking into the city street area after getting off a new elevator….wow, an elevator was welcome here. It all looked new with a nice contemporary steel railing, etc. However, that euphoria over an elevator didn’t last long as the bridge ended and the walk began. It wasn’t too bad considering some we’ve made over the last couple of weeks. We started finding shops all over the place and wandered into many of them and found some cute stuff for the grand-kids in one. I also finally found an olive oil bottle made in Deruta that I liked that was actually a decent price. I decided to come back and get it later if it was still there when we walked back to the car (and it was). We finally found the Basilica San Francesco where Saint Francis of Assisi is interred. It really is a beautiful church with all the Giotto frescoes.No photography was allowed although there were so many people in there that some didn’t abide by the posted rules/signs………or the Silenzio signs either.

Oh yeah, did I mention it started pouring down rain right as we were getting ready to sit down for a bite of lunch? We sat there with our umbrellas, under the umbrellas…….but finally when I saw mats washing down the street it was time to move indoors. We waited it out for a time. Due to the rudeness of the woman working there as we stepped into the space with our umbrellas….we decided to take our business elsewhere for lunch.

So we found a spot, ordered, sat or whatever. They served us, we decided on a gelato for desert. When il conto came, it seems we had to pay double OR more to sit, We sat down and they made us order from there when we’d planned to just order and then sit. Whatever, the reason (and I’d read of this), we were encouraged to do it the expensive way and then billed accordingly. Not happy campers, us.

I’m sure we didn’t see much of what Assisi has to offer but the weather was not cooperating and it was time to head out for Casa Rondini………..we told NUVI, “Home, James” and headed out.

Some might wonder why I would show a picture of the edge of the Basilica, but my eye was caught by the verdant green of the landscape, the larger than life skies and the angles on the walk ways and buildings, with the curve arches just setting them off. These kinds of “marks” will show up in the paintings I will do after I return home from this inspiring land.