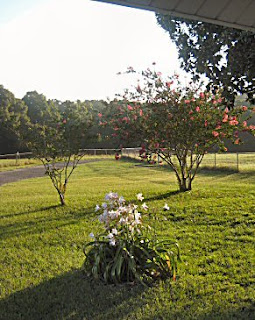 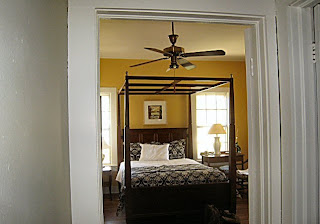 Busy at the farm. This morning we sat on the front porch drinking coffee and I noted how much Granny’s lilies were blooming….give’em water and they bloom like crazy.

DH has been working on the closet in the front bedroom. Old houses don’t have much in the way of closet storage so you just have to make do with what you have. We now have two rods on one side for tops and bottoms…….and a higher one on the other end for long stuff. The shelves are WAAY up but I’m tall so will make do until something better comes along. At least the old carpet in now pulled out, and the floor sanded and varnished. There is one more small closet in this room to work on later…………..one step at a time. We pulled out an old cabinet and tried to recycle it into shelves in the middle…..however, it is just too big so out it went to the garage. I’ll have to be on the look-out for something else for shoes up the middle of the closet…maybe just a lot of wooden cubes attached to the back of the wall.

I’m still waiting for the tile people to show and tell me what’s what in the bathroom. We got the new vanity/sink/faucet and lighting installed ourselves. Now to wait for the tile people to tell me when they can do their work. If I didn’t know better I would think I was in France where repair people show up 6 months after you call them. I did get a plumber to come out immediately when we called them about the lightning hitting the hot water pipe last week-end though……and it ended up taking out two breakers at the garage apartment and ruining the DISH connection to DH’s aunt’s television.

Last night we sat on the east porch drank, a glass of wine or two and watched all the fireworks from the nearest neighbors and town………..big display and surprising to me since I’ve never been over here for the big Fourth of July display before.

I brought a collage from home to put in over the bed to think about…..might work, or maybe better later to put up three very small panels. For now, it’s up. When the electrician gets here to do some work in the computer room, I can get the fan re-installed……..now it’s now functional after taking it down to shortened the “wachamacallit” that hangs from the ceiling. I’ll be glad when all the tile boxes and extraneous stuff is cleared out of here and I can move on to another room.

I’m determined not to put too much in any of these rooms with two households of furniture to combine. It will just be given away to family or given to free-cycle after figuring out what goes where. This is an opportunity to clear stuff out after living in one house over 40 years.