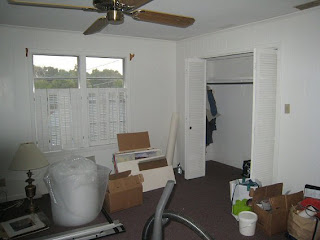 I knew it was coming but it really hadn’t sunk in. I’m moving out to the farm. I’m moving my home studio after 24 years and my home after 40 years. What an upheaval this is…but I hope a good one. I know there will be days (already have been) of exhaustion from the stress both mentally and physically. Ain’t no spring chicken any longer……Also much time if you let it second guessing the decisions. I told my husband, lets just do it, we can always sell if it’s too much later on.

While only about a third of my junk has been thrown down all over these rooms, it now really means this is going to take place soon. I NOW HAVE MY PAINTING WALL INSTALLED.

It’s been a couple of days of cleaning. Most of these pictures were taken in process so try to look over all the dusty corners and bad looking vinyl floors. The carpeted room is in okay shape except for the step down into the painting room….cats had their way here it seems. I’ll figure out something to do about it later. For now the old vinyl will just be scrubbed as much as possible and paint drips can cover the rest in time.

Who can complain to get three rooms and a tiny bathroom for their studio? And the view down the hills, pastures to the lake will be inspiration for me for sure.

I’m including a link to the Flickr folder to see all the beginnings. Hopefully later on I can post more when all the furniture and other “stuff” gets installed.