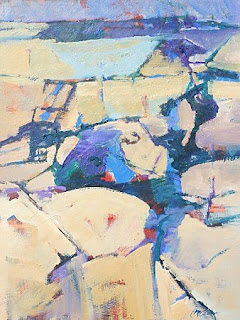 Yaaay…studio time today, finally. Generally, when you have been preparing for a show, you hit somewhat of a lull later and have ‘white canvas‘ syndrome. This has happened to me, but more likely for me is that it frees me to just paint. The show hasn’t opened until tomorrow night, but I had a real disaster on the easel that had a ton of layers on it. I think I have finally resolved this work. Due to ‘acrylic paint death‘ syndrome…(hum..must think of all these syndromes), it might die on me later but I hope not much would have to be done.

Hope anyone around Dallas tomorrow night will drop in at Cerulean Gallery on Hillcrest and say hello.

Until then, I hope you’ve had a great day in the studio… or, wherever your heart lies!