Back In The Studio 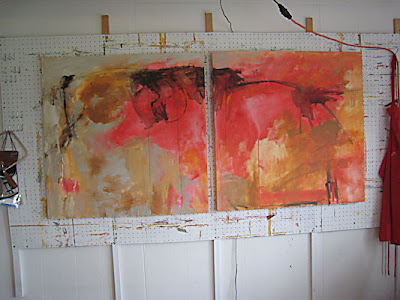 I don’t even want to look to see how long it’s been since I posted to this blog. SO many things come up. I have worked, but just not taken pictures or time to write anything.

Just before heading off to Colony I applied another layer to the beginning of a diptych I started. However, I never posted the last picture of the progress.I wanted to take it to Colony to work on but just ran out of space in the SUV to carry that many canvases.

Now here I am getting all those things that pile up while you are gone done……….and had to have a new central unit put in the studio.

Yaaay…..now I have not two paintings in progress, but SEVEN. That might be a few too many. I like keeping more than one thing going at a time so I can flit around between them all when I find I don’t know where else to go………….but SEVEN and the smallest is 30 x 30″……so lots of visual conflict.

SO..it’s a beautiful day so far so I better get into my painting clothes and out to the studio.