I’m finally making progress on the 4 panel painting……….collage, mixed media, encaustic. As mentioned earlier I noticed the panels are actually about 1/4″ off so I can’t turn them every which way to line them up as I thought I might be able to do. SO….they are definitely vertically oriented although the finished piece will  be horizontal.

Last time I worked on these before the week-end, I left the studio thinking it was a good thing the last work flowed for me since this one is being a little more contrary. I really don’t know where I’m going. Sometimes I like that…well really, I mostly always like that. BUT, some parts of some processes don’t and they demand you either know what you are doing, or be ready to go with whatever happens…and heck, cover it up if it doesn’t work out. SO, I’m giving it up to all the higher powers to guide me through this work.

I first just put medium on all the panels after I marked here and there all over the pieces with Conte. I had been rummaging through my junk, collage stuff and found some quotes that sounded interesting to include. So I added them to the panels…two of them, anyway. This is best done before adding the medium as you can’t write with the usual pencils or chalks on top of the medium. (This is what I mean about knowing where you’re going). Of course, as I applied the medium I changed my mind where the two with the writing would go.

I started tossing out a lot of papers..and pieces of junk I collected on trips. I just kept tearing and cutting the pieces of paper out and laying them down. Now…nothing really looked good or showed promise at all in my estimation. 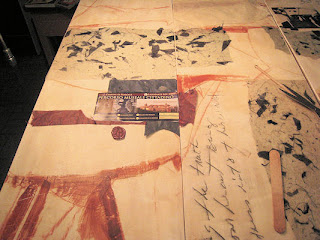 This is a section of the farthest left panel before I applied medium to the papers lying there. 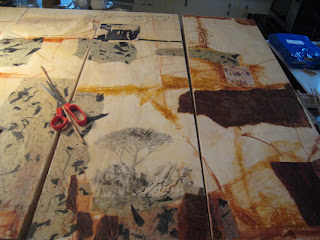 These sections are the ones to the farthest right. Yeah….there is my Umbrella pine again….I’ve used it several times…this is the first time I’ve used my photo as a transfer and I also added some to it. I have some other collaged elements from that same trip.  So far there is not much encaustic paint on TOP of the collaged elements. First I lay down the pieces and then I have to just decide to add the medium over and fuse them. If it doesn’t work out, I can heat it up and move it or paint over it later. I have to say…working with wax and collage elements is easier in that they don’t go blowing and moving around quite so easily as doing them on paper with acrylic medium. BUT you can easily almost cover up what you want to remain so you have to be careful in some areas…..or do a lot of scraping back. 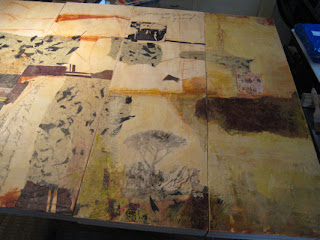 Now I have some encaustic paints starting to build up on the far right panel and some into the one to its left. 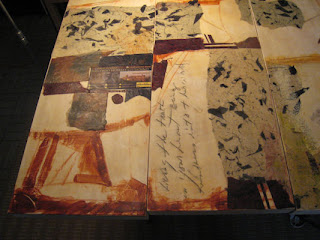 Parts of the far left panel…. nore work to be done and medium and fusing to do here. 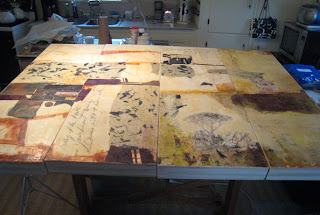 I got back and held the camera up as far as I could. I was tempted to climb on a chair but my good sense returned and I put the chair back…nothing like falling down and then hurting myself for a picture of a work in progress.
This is how I left it at the end of the day. Can’t keep working as hubby will be wondering if I’ve deserted him…and especially his dinner……Humm..what’s that dinner going to be?